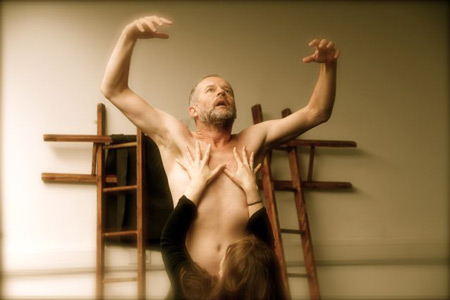 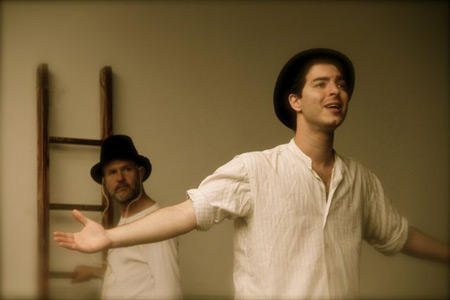 Dybbuk: the soul of someone who has died too early

The Dybbuk is a modern play inspired by Solomon Anski’s great Yiddish classic. Pascal’s Dybbuk starts in Germany where Judith, a British atheist Jew, looks at today’s Germany and feels that Hitler has won. Judith is haunted by thoughts of her lost family and this leads her in to a dream world haunted by ghosts – or dybbuks.

She imagines a ghetto somewhere in Eastern Europe where five non-religious Jews live their final day before transportation to Auschwitz. In this ghetto, the five Jews argue, discuss cabbala, love, sex and death, relate fragments of their lives, play out half remembered scenes from the myth of The Dybbuk (which inspired Anski) and dream of full bellies.

The actual Dybbuk myth is encapsulated in a play world which the Jews walk in and out of, where finally the possession of the young girl’s body by the spirit of her dead lover, is evoked in a four minute Expressionist dance.

“It reveals a genuine imaginative flair…”
The Guardian

“…as spine-tingling as anything you’ll see in the theatre this year”
DYBBUK, The Independent

“… one of the most remarkable pieces of theatre I have ever seen”
DYBBUK, Plays and Players

(Lights up on JUDITH. The actors are dressed in 1940s costumes. One has a sewing machine on her shoulder. The others carry suitcases which they hold against their chests.)

I was in Germany and they went on strike. Not because of me. It was nothing to do with me. A little

holiday with my fiancé combined with a little research for my job.

It was a hot spring day in Frankfurt. In the park by the Opera House, just by Goethe’s statue, two hundred young people were shooting-up. We were walking hand in hand.

And suddenly we were in Dante’s inferno.

They were burning stuff, snorting stuff, injecting stuff. It was a kind of communal mass. One girl filled her vein with heroin and then passed on the syringe to another young woman. I wanted to shout, ‘Stop, don’t take it.’ But she was past knowing anything.

I took trains in the strike. There were no trams or buses but the trains still ran on time. To. The. Second.

Strange things happen to me on trains. I meet men. Of a certain age. Men who have not enjoyed the mercy of a late birth. For some strange reason, they are always drawn to me. They are curious. They ask me something in German and, when I respond, they tell me my German is good and where did I learn it. From my grandmother. Was she German? No, Romanian. Then I wait. Shall I pretend she was a Christian? I can’t. [Pause.] She also spoke Yiddish.

Then they look at me hard. There is usually a silence.

Maybe they talk about something else, the strike, what a pity it is that there is no Berlin Wall, the invasion of all those East Germans, anything to cover what is going on behind their eyes. And then, little by little, it comes out.

‘I knew about the Jews. Yes, I knew. I even helped them. My mother lived on the Dutch border. She heard the trains. She used to go out when it was a new moon, in order not to be seen, you understand. She went out and picked up all the scraps of paper, the tiny messages that the people threw out. They wrote on anything, a label from a jacket, a handkerchief, any scrap of material would do. The messages were to warn children in hiding. Of course we collected all these messages and fi lled up our kitchen table with them. We tried to get word to those hidden children. We did what we could.’

They don’t always pretend to have helped. Sometimes they tell me of their life in the Hitler Youth. Of their joy in pointing out a Jew hiding a yellow star behind an empty briefcase. Of Jews riding in trams, refusing to ride in the Jews’ car.

I go to Germany and I think that Hitler won. Where is my generation? Where are my cousins?

Where is the dream of assimilation? Oh yes, Hitler won. In Heidelberg, just by McDonalds, is the square where they rounded up the Jews. I see a man in a yamulka. He wears the mark of a religious Jew in defiance.

Somehow he embarrasses me. As so many religious Jews do. Am I ashamed to be a Jew? Is this my own self-hatred?

My own antisemitism? I don’t even believe in God, so what makes me a Jew? They don’t talk of such things in my family. Keep your head down. Be British, be cool, be part of the crowd.

More and more I think about my family who vanished. I wonder what happened to them.

I imagine them in a ghetto in Vilna or maybe in Warsaw or Lodz. I know it sounds strange but I am haunted by faces, different accents, different bodies, all the lost cousins and aunts and uncles who I want to have known.

I see a blonde woman, a dark man, a curly redhead, a fair boy. I don’t know who they are but they often come to me in dreams. They say that a person can be filled with the soul of another and that soul, which has died too early, is a dybbuk, but I, I, I, have so many dybbuks.

(Lights change. Actors slowly turn around. Slowly they let the cases fall to reveal yellow stars on their left breast.)

(They are quietly singing ‘Alexander’s Ragtime Band’ as they assemble objects which make ‘beds’ from planks or sacking. NAOMI is putting on lipstick.)

When the Titanic went down they were playing‘Alexander’s Ragtime Band’.

Where did you get lipstick?

You want to eat this? Lipstick’s very good for you.

Leave her alone will you.

Don’t be silly there isn’t a Queen, there’s a King. The Queen of England is just a little girl.

Queen Marie of Romania; she was English royalty you know. The English know all about royalty. Oh yes, Queen Marie was English. Queen Victoria’s granddaughter. Her son, King Carol, had a mistress.

How do you know?

I shouldn’t be here. I’m only half Jewish. My father was a Jew, it’s true, but not my mother. She is a pure Aryan.