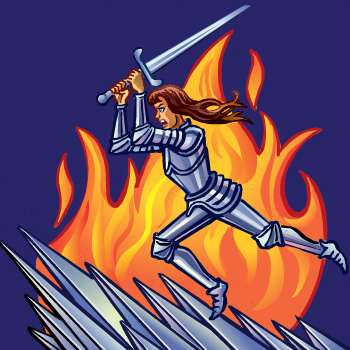 ManyTracks Inc. was established in 2009 and founded by Katrin Hilbe. New York-based it is focused on engaging, mind-provoking theatre that values asking questions over providing answers. ManyTracks presented the five star winner Breaking the Silence at the 2013 Edinburgh Festival and is keen to return with St Joan to build on last year’s success.

Add2 Productions is a new venture headed by Kati Hind. The Company  collaborates with other artists to produce top quality, ground-breaking theatre.  St Joan is its first production  and has been selected by Add2  because it  unites complex textual elements, chorus- based work and highly physical performances. St Joan will be staged in an abstract world of steel to create the rough and exciting journey Joan makes from stake to horse!

« The book of The Secret Listeners is now available
A brilliant, challenging show ***** »