“The play, written and directed by Julia Pascal – and enjoying its world premiere at the Finborough Theatre – is powerful fare.”
BLUEPRINT MEDEA, Jeff Prestridge, Close-Up Culture   2019

“[Blueprint Medea] successfully spans vastly different worlds and cultural expectations all within the tiny intimate space that is the stage of the Finborough Theatre. Blueprint Medea is a multifaceted and complex drama, and is capable of making a connection with audiences wherever they may be.”
BLUEPRINT MEDEA, Dominica Plummer, The Spy in the Stalls   2019

“In Julia Pascal’s modern reconception of the ancient Greek tragedy, she is reborn as a former fighter for the Kurdistan Workers’ Party (PKK)…It is an inspired transposition, and the themes of exile and female agency resonate in the modern day.”
BLUEPRINT MEDEA, Arifa Akbar, The Guardian 2019

“An engaging and dynamic production, admirable for its risk-taking and originality of vision.”
BLUEPRINT MEDEA, Arifa Akbar, The Guardian 2019

“To have such a profound effect highlights the power and importance of fringe theatre and writers like Pascal providing a voice for these voiceless females onstage.”
BLUEPRINT MEDEA, Dominica Plummer, The Spy in the Stalls   2019

“The undeniable richness and power of the storytelling and performances.”
BLUEPRINT MEDEA, David Guest, The Reviews Hub 2019 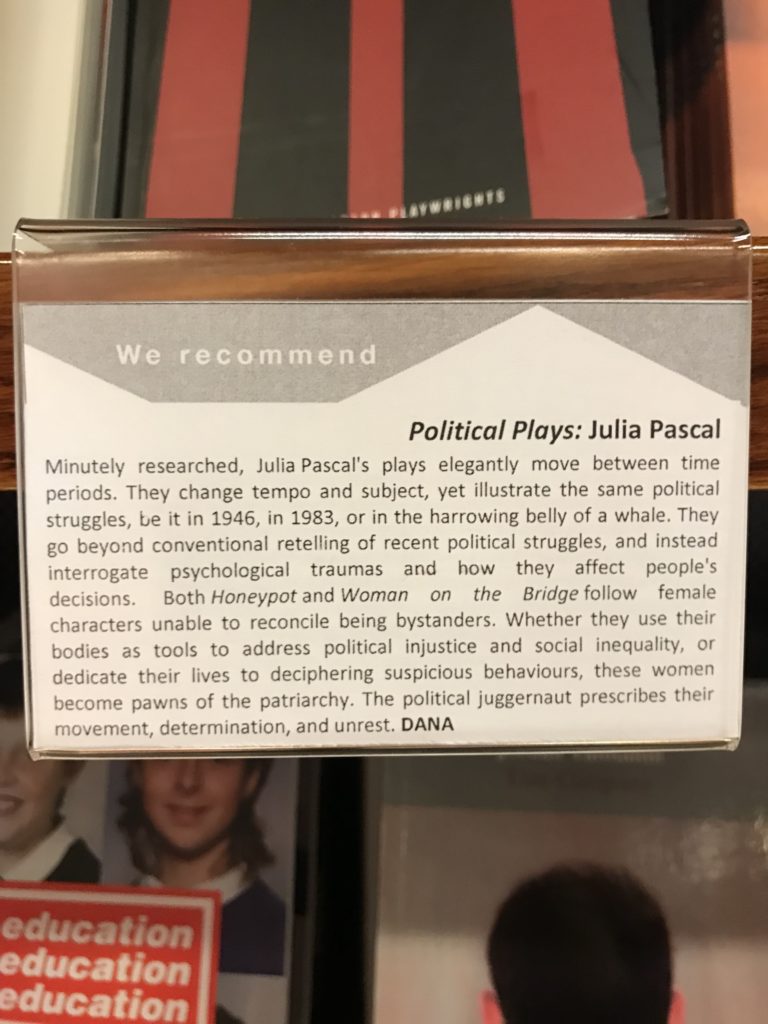 “We’ve been ashamed of our voice: the secret history of UK Jewish theatre”
The Guardian, David Jays speaks to Julia Pascal, 2019
https://www.theguardian.com/stage/2019/mar/13/uk-jewish-theatre-voice-secret-history

“Pascal has long interrogated Jewish attitudes and experiences without ever denigrating them. Here, too, she is even-handed .Israelis and Palestinians – all are subjected to the unblinking gaze of Pascal’s writing.”
CROSSING JERUSALEM The Times Higher Education 13/8/15
https://www.timeshighereducation.com/culture/crossing-jerusalem-written-and-directed-julia-pascal

“A crucial piece… ‘Timeless’ is a word that is tossed around extremely frequently these days, but it is certainly the most appropriate word to describe Julia Pascal’s Crossing Jerusalem.” ★ ★ ★ ★
CROSSING JERUSALEM The Arts Desk  7/8/15
http://www.thereviewshub.com/crossing-jerusalem-park-theatre-london

“Very Deep… A powerful account of a complex issue…. While the title suggests dynamic action, the small stage space and extremely personal scenes make for a claustrophobic, intense atmosphere, in which the dangers the characters face seem all too real. This climaxes with the disintegration of Varda Kauffman-Goldstein, wonderfully played by Trudy Weiss, whose exhaustion, even before her son, Gideon, is killed, represents not just a woman, or even a family, at breaking point, but an entire country.”
CROSSING JERUSALEM The Review Hub 07/08/2015
http://www.thepublicreviews.com/crossing-jerusalem-park-theatre-london/

“Barely 90 minutes in length, the play exerts a powerful grip using the simplest of means”
ST JOAN, The Stage

“A compelling piece of total theatre that weaves testimony, storytelling, physical theatre and poetry into an opaque but thought-provoking exploration of redemption”
NINEVEH Time Out 19/04/2014
http://www.timeout.com/london/theatre/nineveh

“Pascal has long interrogated Jewish attitudes and experiences without ever denigrating them. Here, too, she is even-handed .Israelis and Palestinians – all are subjected to the unblinking gaze of Pascal’s writing.”
CROSSING JERUSALEM The Financial Times 19/3/03
http://www.cix.co.uk/~shutters/reviews/03017.htm

“…one of the virtues of this engrossing piece is that it reminds us that the Israeli-Palestinian conflict is both shadowed by the decisions of the past and played out in a state roughly the size of Wales.Pascal very successfully breaks through the stereotypical idea of a homogenised Israeli society. By confining the action to a single day, Pascal captures the pressure-cooker intensity of Israeli life and shows how present actions are shaped by past guilts.”
CROSSING JERUSALEM The Guardian 24/03/03
http://www.theguardian.com/stage/2003/mar/24/theatre.artsfeatures

“Julia Pascal’s seething and passionate new play comes as a salutary reminder that, just because the anxious eyes of the world are turned to Iraq at the moment, it doesn’t mean that other global troublespots have miraculously gone away.”
CROSSING JERUSALEM Evening Standard 10/4/03
http://www.standard.co.uk/goingout/theatre/family-at-war-7429634.html

“This is the most ambitious attempt to illuminate the world’s most intractable problem since David Hare’s ‘Via Dolorosa’. Compelling.”
CROSSING JERUSALEM, The Jewish Chronicle 2002

This modern prose play is so organized in time and space that it acquires the kind of austere beauty and rhetorical tension we associate with the tragedies of Racine”
A DEAD WOMAN ON HOLIDAY, The Financial Times

“Pascal’s play is a tense and stirring piece of theatre, acted with fierce intensity by an international cast” THERESA, The Times 2003 “… an excellent example of how skilled players can convey a wide range of character and emotion with only a few props and a shift of expression and accent”
THERESA, Jewish Chronicle 2003

“Truly experimental and truly European, Theresa plays with form on every level, fusing dance with theatre, music with text and juggling fragment of French, German and Polish within a predominantly English script… arresting”
THERESA, City Limits 2003

“It reveals a genuine imaginative flair…”
DYBBUK, The Guardian

“…as spine-tingling as anything you’ll see in the theatre this year”
DYBBUK, The Independent

“… one of the most remarkable pieces of theatre I have ever seen”
DYBBUK, Plays and Players

“Lovely singing, sensitive direction and a tragic historical twist, this play is an effecting and eclectic treat”
THE YIDDISH QUEEN LEAR, Evening Standard

“Pascal builds up an intricate portrait of a family fractured by sibling jealousies  and betrayals and seething resentments…a fascinating and enjoyable evening”
THE YIDDISH QUEEN LEAR, The Guardian

“This is a raw play. . . prepare to leave exhausted and angry”
THE YIDDISH QUEEN LEAR, TNT Magazine

“The play astutely explores the changing identity, the slow assimilation of diaspora Jews and notion of homeland. Ruth Posner is excellent as the imperious actress”
THE YIDDISH QUEEN LEAR, The Jewish Chronicle