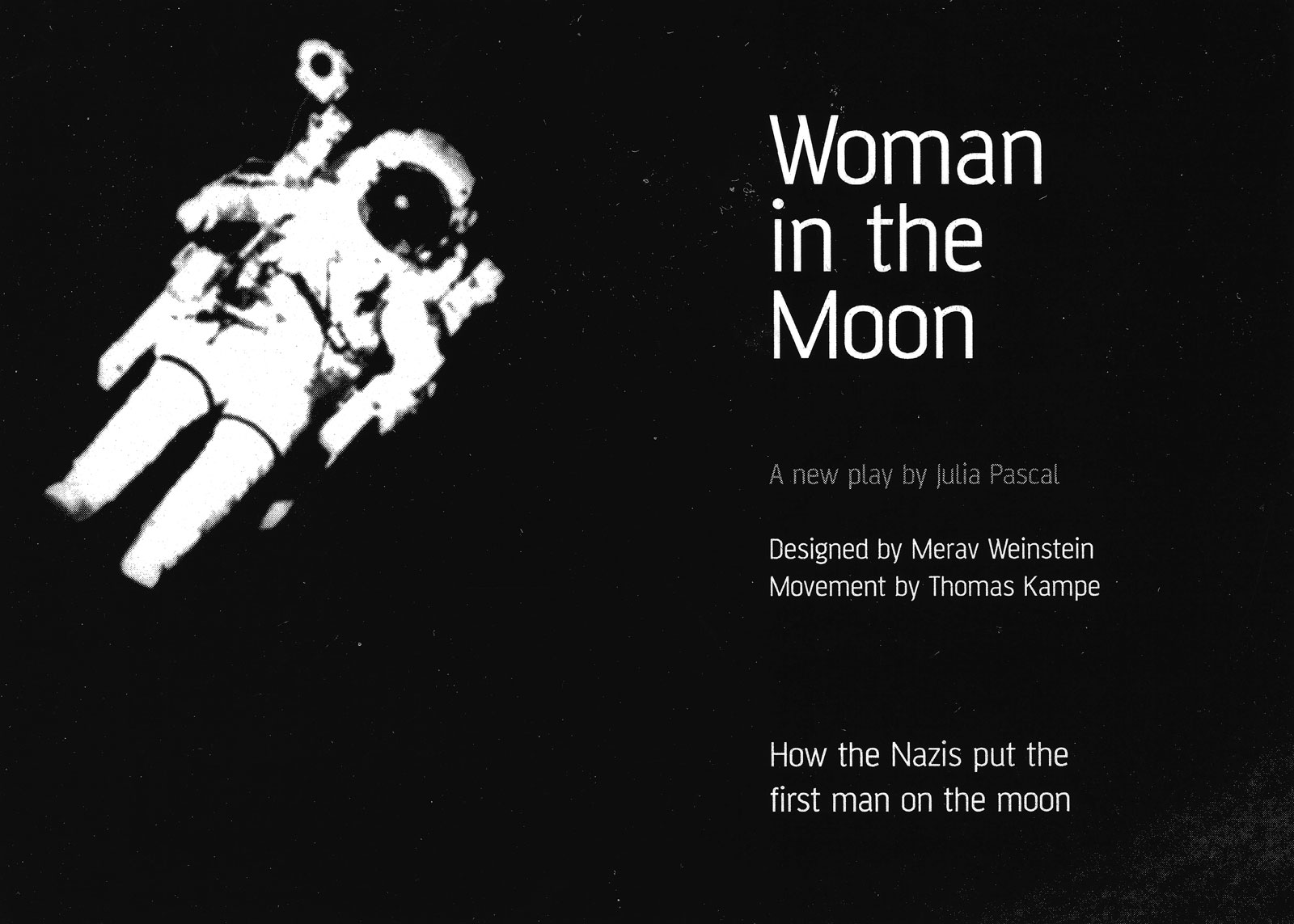 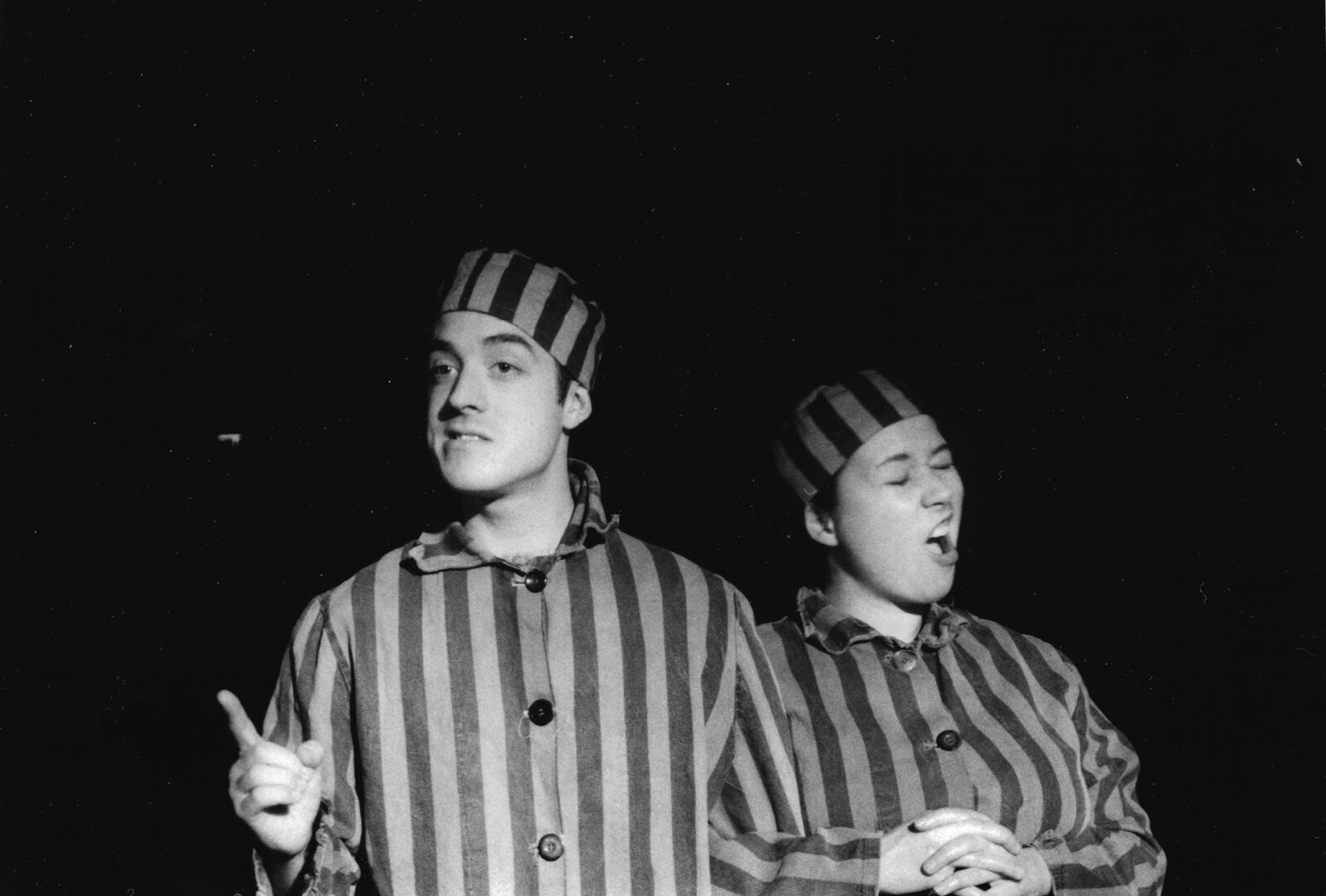 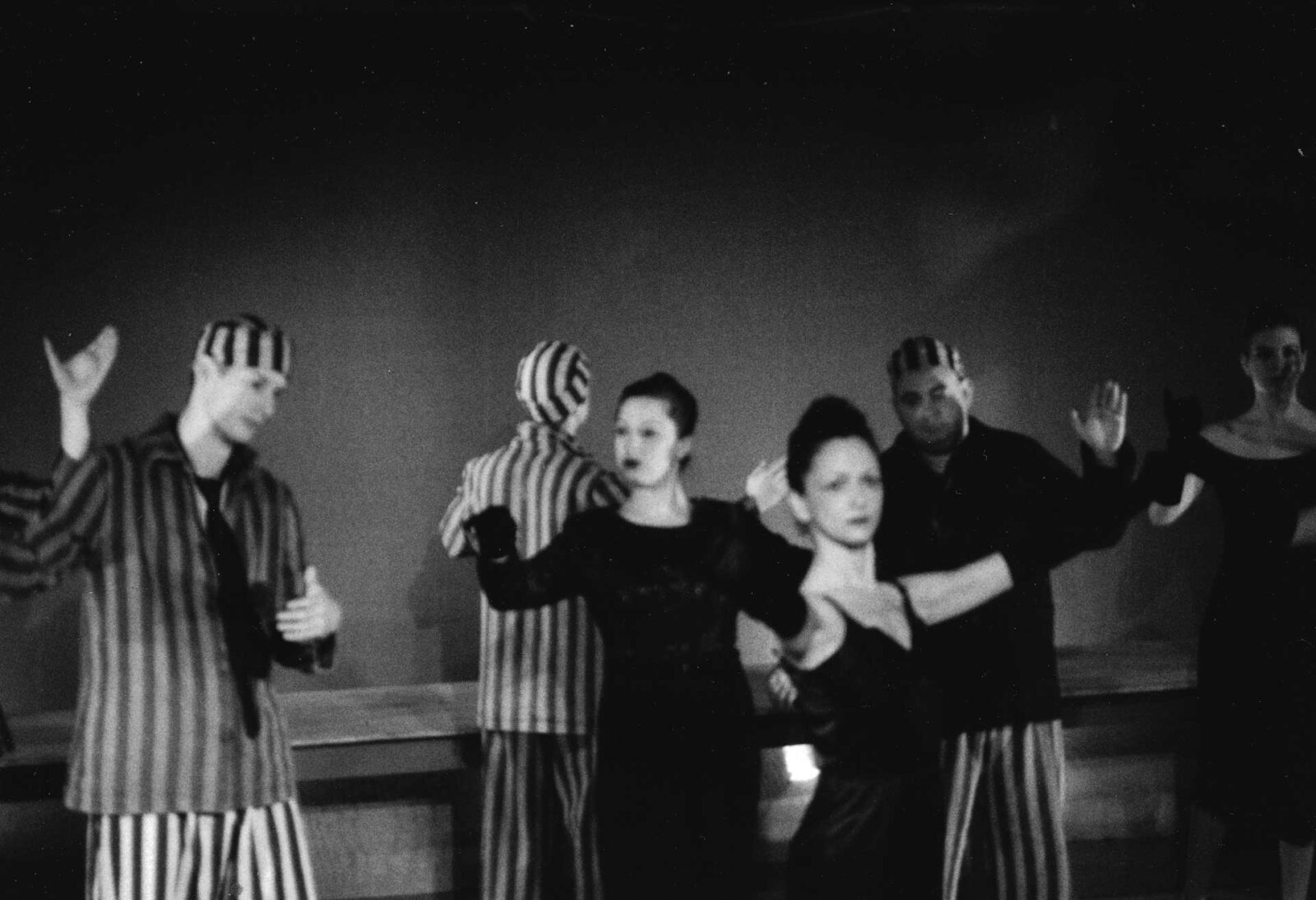 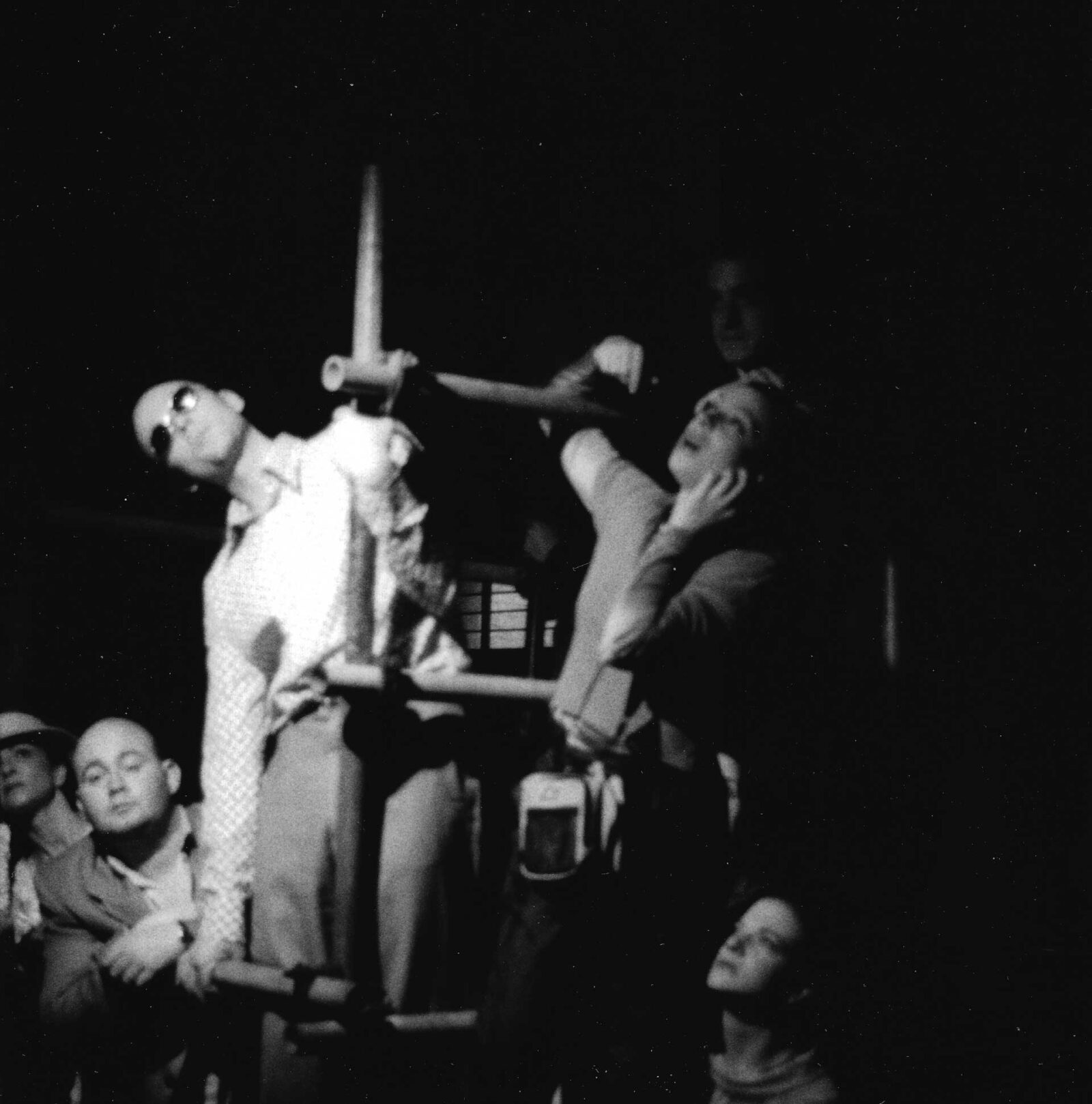 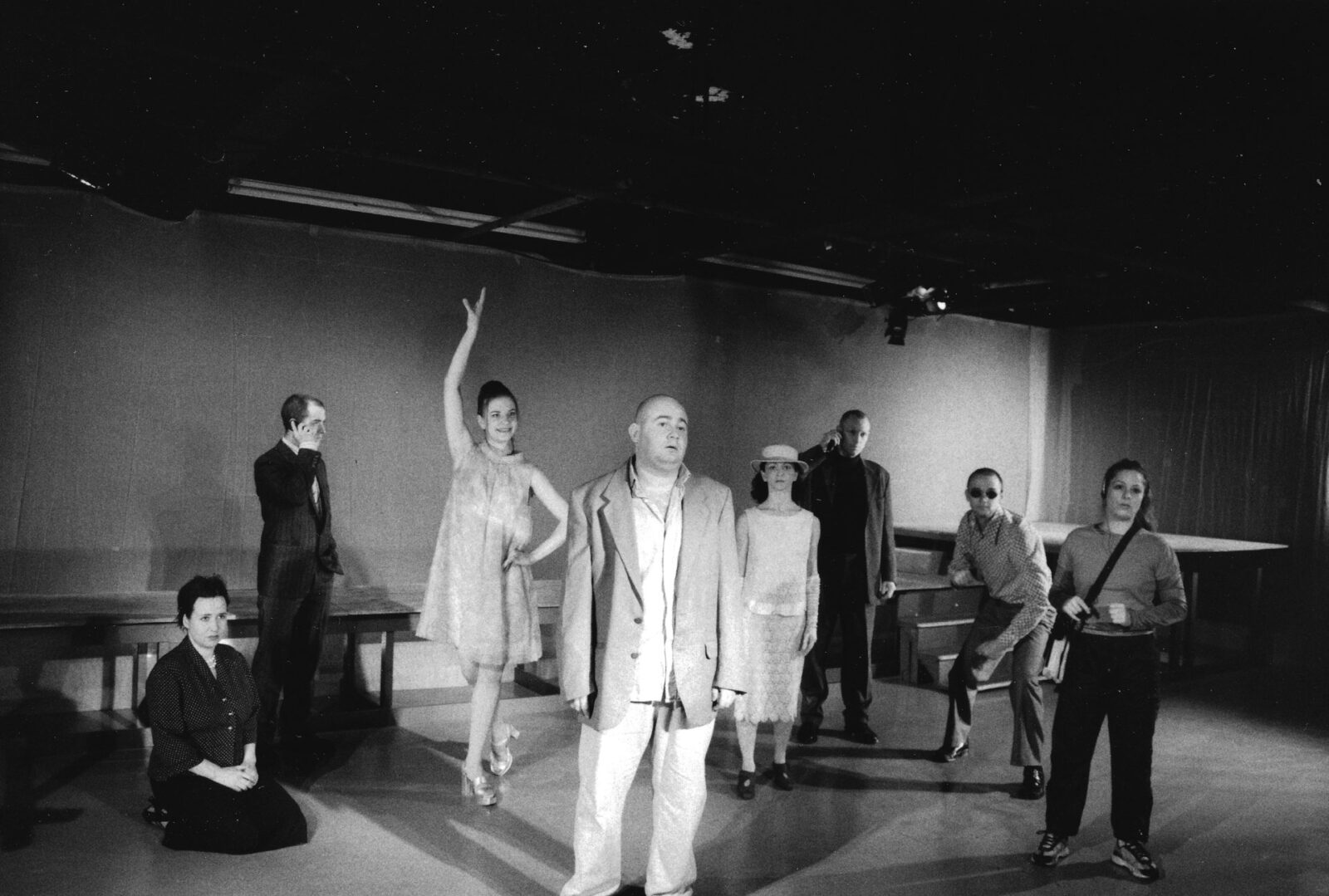 Fritz Lang’s great silent movie Frau im Mond premiered in l929 and gave the world its first celluloid space travel fantasy. The film had an enormous impact on German rocket scientists, most notably Wernher Von Braun, the brains behind the l969 US space mission. But Von Braun’s achievement caused the deaths of thousands of slave labourers in Camp Dora where Vl and V2 rockets were constructed as Hitler’s secret weapon to crush the British.

Pascal’s play explores the connection between today’s technologies, such as the mobile phone, and their links with the pilotless planes that killed the British as the war was drawing to a close. Death machines that would eventually be the prototype for the race to the moon.

The play is based on testimony from French, German and Austrian Camp Dora survivors.

Woman In The Moon, is a non-liner exploration of von Braun’s ambitions  from childhood dreams to his success as one of the main brains behind  what became the Moon Landing.

The drive of the action is von Braun’s desire to escape from accountability  for his actions as a Nazi scientist. Journalist Dora Maitland, wants to try him  for his Nazi past.

Woman In The Moon, exposes von Braun’s work in Camp Dora, where  thousands of slave workers were used to build the rockets that were sent to  bomb London. It reveals how Nazi research was secretly harnessed by the  US even as it was trying Nazi criminals in Nuremberg. This drama asks  questions about the morality of a science that uses humans as slaves to  advance technology.

Much of the text was sourced from those who had worked as slave laborers  and survived to tell their stories. Other testimony is from hidden children in  Poland supply areas of narrative.

I have to get out into the air. [The group walk as people in the street]

I walk. You walk. He walks.There is someone walking behind me..He walks.Who is he?Does he recognise me?From the Warsaw days? When there was no ghetto.Perhaps his sister had a dress made in my shop?He’s not so close now.I walk.Silence.A car. Slow. Coming closer.My heart will smash.Look ahead.Don’t turn round. It’s coming close. He is singing with the window wound down.(Hatikvah is sung)

From my youth. Hatikvah. Hope. Only a Jew would sing that. Only a Jew would know that. Only a Jew would turn around.I walk. I walk. I walk.I don’t turn round.Jewish scum. Out to catch a Jew for his Nazi paymasters.He’s getting closer the filthy Jewcatcher. Turn now and I will be a pillar of ash.He is next to me now.Singing softly. I walk. I walk. I walk.The song means nothing to me. I hear nothing. I am an Aryan.How many did he catch today?Hope!How much longer must I walk and my feet are dead?I want to sit in a warm cafe and drink something hot. I want to sit in a restaurant wearing a fur coat not trawl in worker’s clothes like a kitchen maid.I walk. I walk. He walks. Again. That man is following. The first one from before Hope. I walk. He walks. I stop. He stops.He knows me. My face hasn’t changed even after all I have seen. I walk and if I run, he is stronger, he will catch me.Jew he will yell like so many I have seen suddenly screaming Jew in the street. Jew he’ll yell and I will freeze like a rabbit. What will happen to my baby? Who will care for her if he yells Jew.

I walk. I stop. I turn. The man is looking at me. I look. He looks. He looks down. I look down. In his hand there is something red.Something strange and stiff. I want to laugh. I want to empty my lungs and laugh with relief. Is that all! Thank God.

Written and directed by Julia Pascal
Designed by Merav Weinstein

The play was produced at London’s The Arcola Theatre in 2001. It had  excellent reviews and audiences. This text is based on research on the US  Operation Paperclip which is still mainly unknown. The scientist Wernher  von Braun was in the SS and worked in Camp Dora which was situated in  the Harz Mountains. There slave workers produced the V2 rockets used  against Britain. Slaves were treated terribly and thousands died in the  underground tunnels where the rockets were made. The V2s were a  prototype for the spaceship. At the end of the war the Soviets and the  Americans rushed to get hold of the V2 scientists so that they could be used  for the race for the first Moon landing.

Vom Braun’s collaboration with the Nazi war machine was hidden. He was  celebrated as a scientist helping the Americans be the first to get a man on  the Moon. Von Braun was a media star and died before Operation  Paperclip became known by historians.

The drama focuses on a New York Times journalist, and Shoah survivor,  tracking down von Braun with the aim of bringing him to justice.